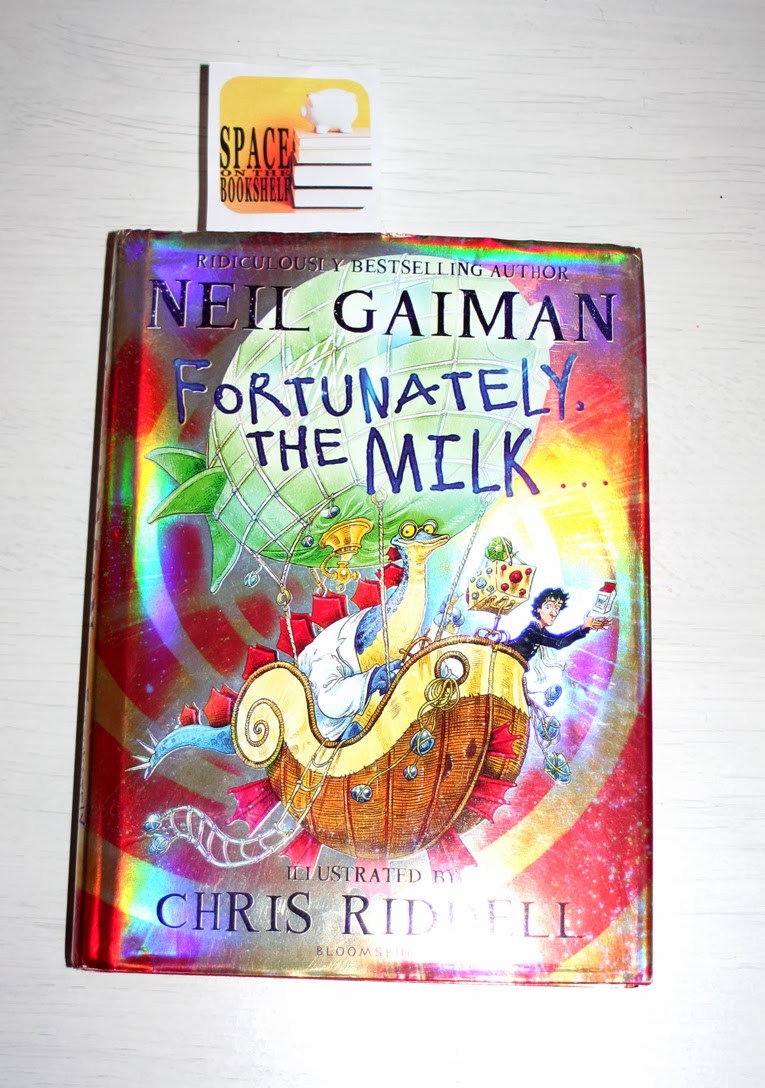 Fortunately the Milk, is a book where you wish you had been a fly on the wall when it was pitched. I believe if anyone else had said, ‘I’m going to write a book about a dad who pop’s out to buy some milk, and there’s going to be dinosaurs, pirates, vampires, rainbow ponies and a space time continuum breach,’ they would have been laughed out the room.  To be fair, who else would have tried? Who else other than Fortunately the Milks, author Neil Gaiman could pull all these elements together to create an exciting, fun, and quirky book?

Fortunately the Milk tells the tale of dad (who has an uncanny resemblance to the author) who pop’s to the shop to buy milk for his children’s breakfast and upon his return explains his delay on being abducted by interior decorating obsessed aliens, then escape in to the hands of bloodthirsty pirates, before becoming sidekick to a Professor Steg, an time travelling dinosaur. The book is simply bonkersly fabulous, and enhanced by Chris Riddle’s beautiful illustrations, they are so good that my seven year old son spent hours (and hours) utterly mesmerised by them, especially the pull out in the centre. 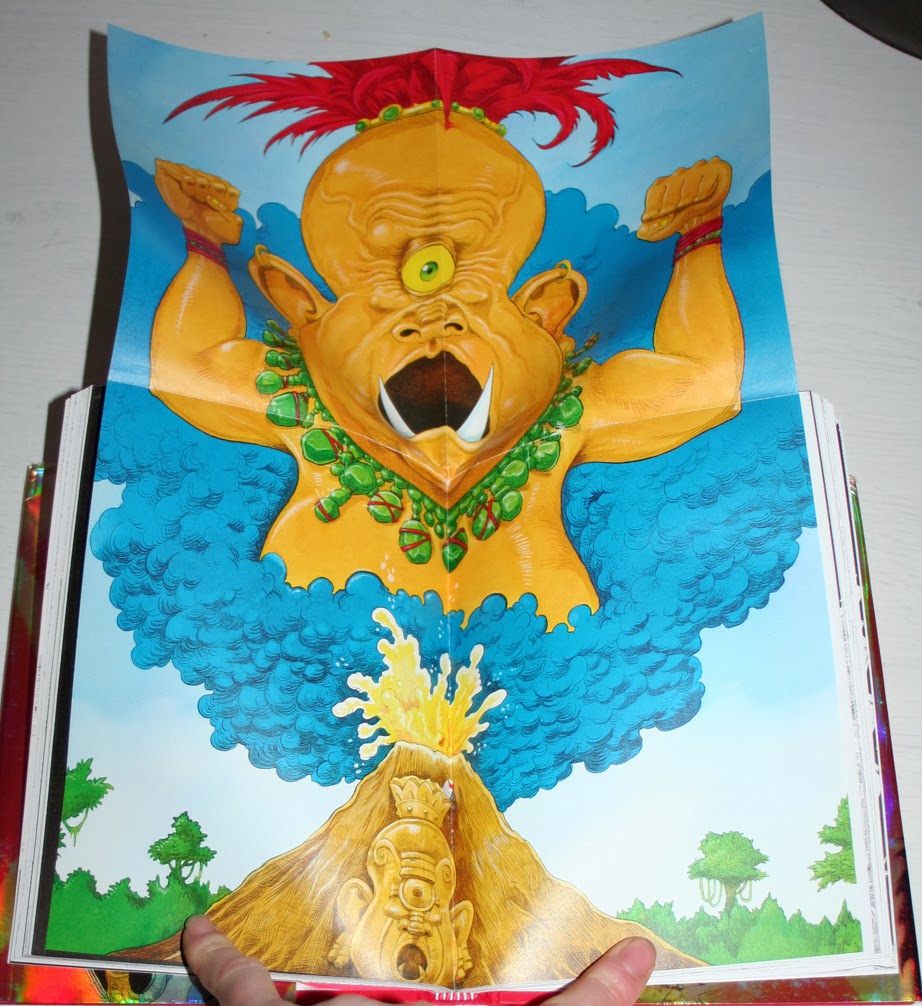 The thing which makes the story so unique, is that all the elements, (all of which singularly would capture the imagination of a child), are put together in a way that delivers complexity to the readers yet remaining obtainable. It’s a hilarious jaunt through space and time, that trusts the young readers to keep up with the more complex concept, like...

“what would happen if I touched these two [pints of milk, the same pint, one from actual time and one from fifteen minutes earlier] together?’ 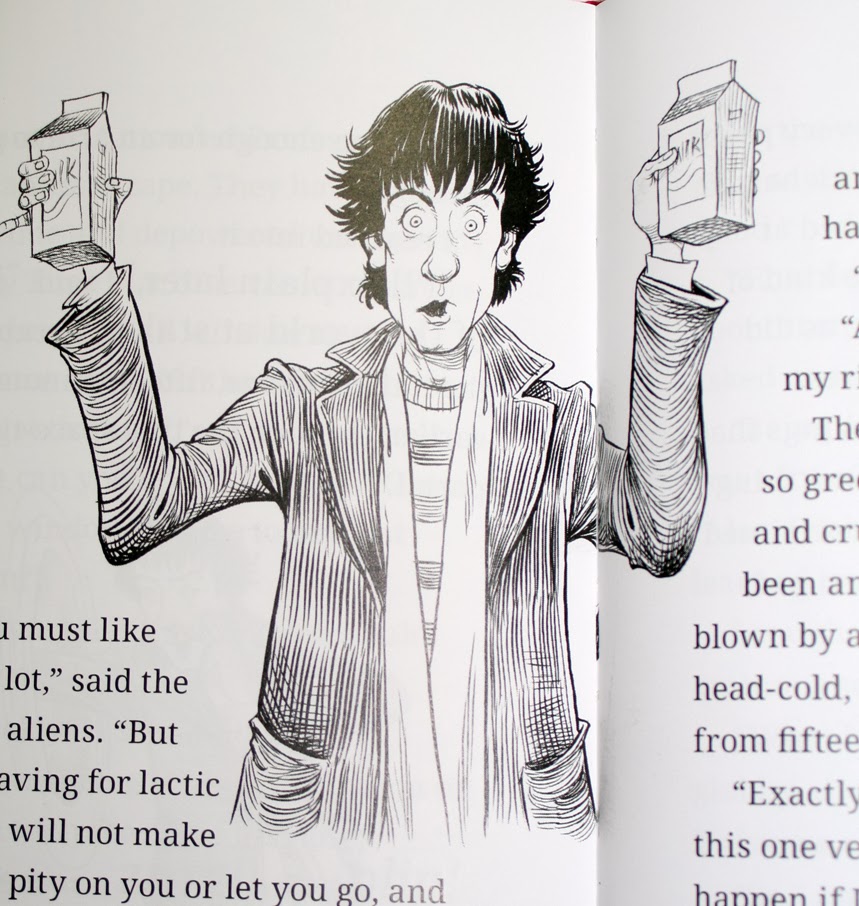 "If two things that are the same touch… then the whole universe shall end." responds the Volcanoes God.

Of course you’d all expect the Volcanoes Gods answer to be correct; But this is Neil Gaiman so be prepared for something completely different.

Everyone in my family has read the loved this book, son (see review below), my daughter me and my husband. We all LOVE the book. It’s funny for children, amusing for adults, and perfect for the generation of children who have been weaned on Dr Who and Star Wars who have the capacity and thirst for more complex plots to capture their imaginations.

I liked Fortunately the Milk because the Dad is telling the children a brilliant story about him and ProfessorSteg ( a stegosaurs who travels in a hot air balloon-time machine) going backwards in time and seeing all sorts of things as they try to get the milk back for the children’s breakfast. It is really really funny! I love the illustrations because they are very funny too, I like the fold out picture in the middle most of all. I think everyone will like this book. 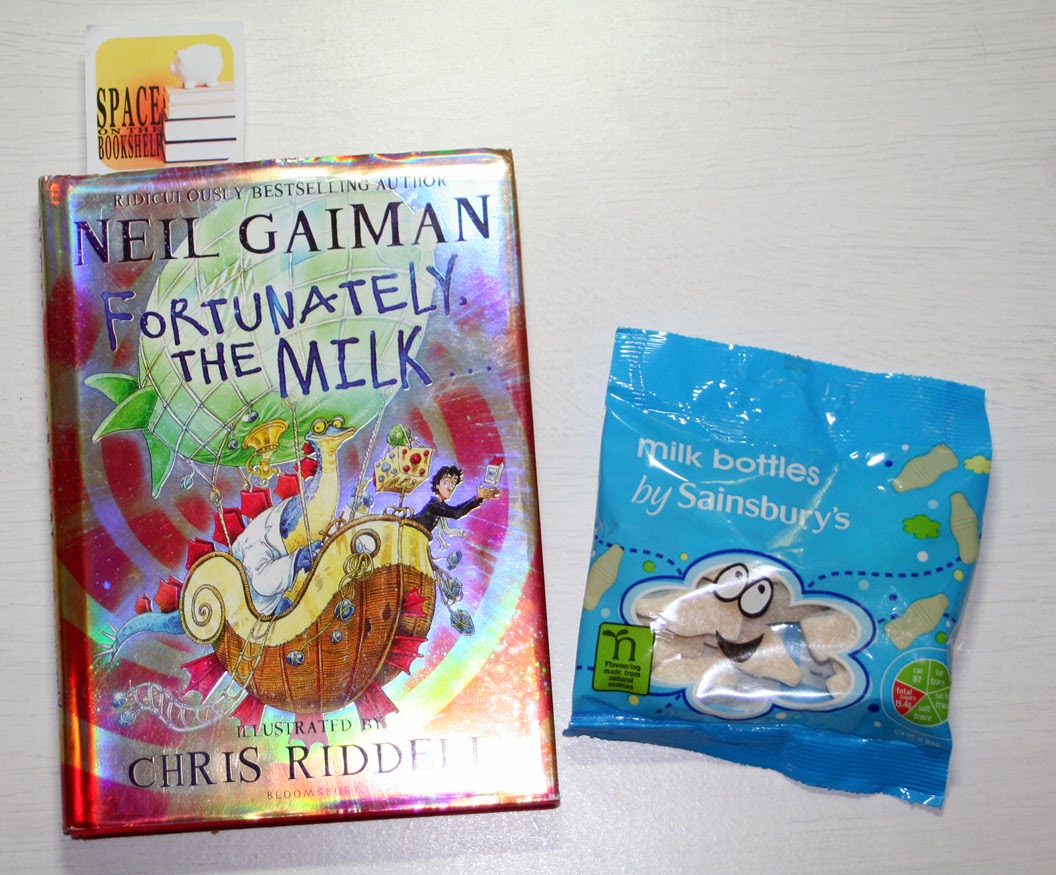 We have a copy of Fortunately the Milk to give away! Along with a bad of Milk Bottle Sweets!  Just e-mail SpaceOnTheBookshelf@yahoo.com with your name address and Milk in the subject bar  and tell us where you go if you had a time machine, (don't forget to tell us your address too!) 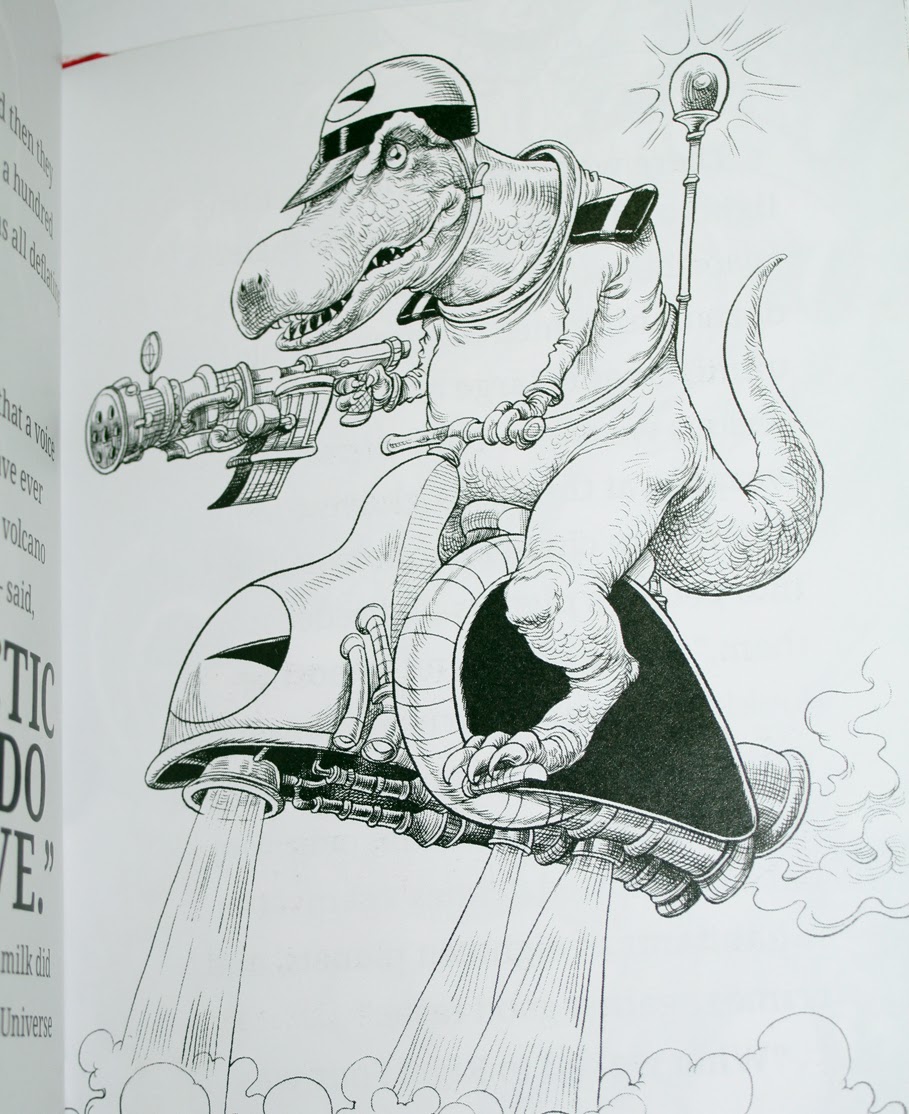 Being dyslexic, and knowing many dyslexic youngsters, I’m a BIG fan of Barrington Stoke’s books. Barrington Stoke’s are publishers that publish books produced and written especially for challenged readers. I have in the past had conversations with teachers who praise the books for their readability for children and teens with reading challenges, and with people who teach English as a foreign language to adults who say that the YA books are fantastic teaching tools for their students. So Barrington Stoke books are versatile and are enjoyed by many non-challenged readers, for instance my nine year old is obsessed by Tony Bradman’s , Young Merlin Series, and if any further proof were required we need look no further than the Clip Carnegie longlist which features Anthony McGowan’s Brock. We featured Brock as a 3D review last year press here to read. 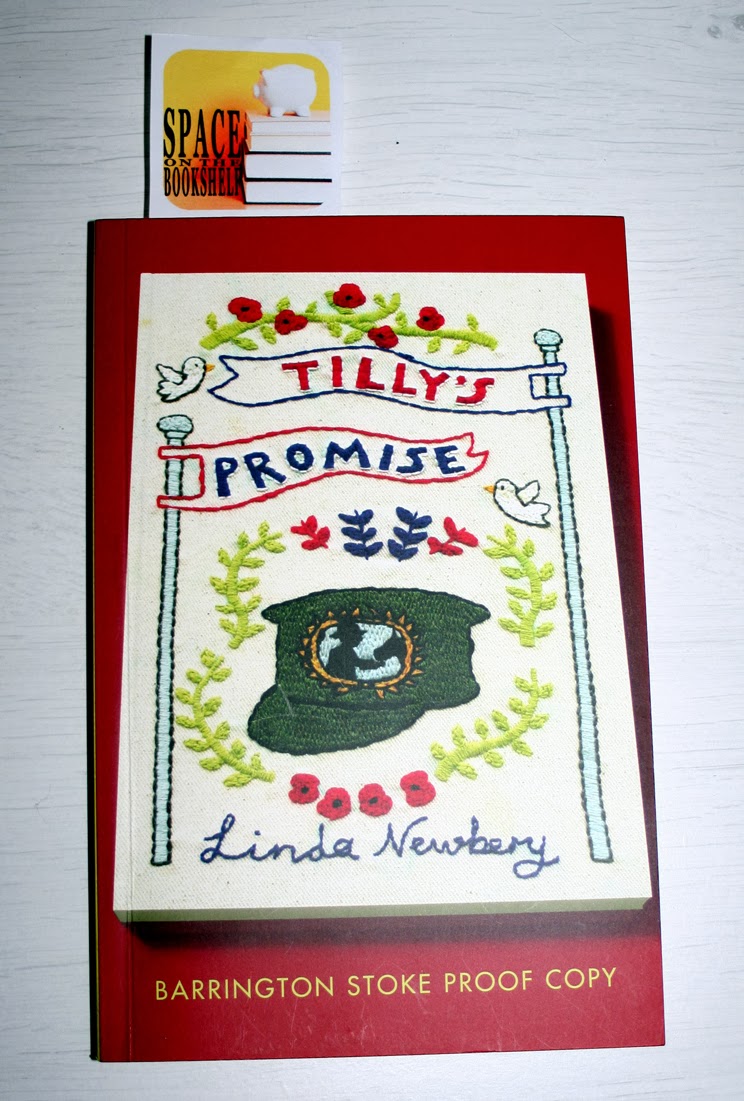 In the Future we at Space on The Bookshelf intend on reviewing many more Barrington Stoke titles, and to kick off 2014 we are reviewing Linda Newberys touching World War One tale, Tilly’s Promise.

Tilly's Promise has a beautiful designed front cover in the style of the embroidered Postcard of time, to read more about the cover visit Barrington Stoke blog by pressing here.

28 July 2014 will see the centenary of the start of World War One, so Tilly’s Promise is published to coincide with a year that is set to be filled with many books, documentaries and talks of the anniversary. Linda has produced a beautiful, touching and gentle tale which focuses on relationships and the fragile nature of promises which are so easily shattered amongst the tragedies of war. Linda tells the tale of Tilly who trains to be a nurse and her blossoming relationship with her sweetheart Harry who is called to the frontline.

The story is exquisitely set in a rural village showing the new of war spilling into the idyllic life, and the impacts on the community as son’s and Tilly’s Sweetheart Harry head for war. In the frugal word count the setting unfolds, watching Tilly’s feelings for Harry unveil despite distance and constraints of war, and how one simple promise threatens to unravel their evolving love.

Linda’s brother Georgie “…was a big, strong boy, but he’d always been slow to learn.” But George is a gentle sole loving the company of animals, “…he loved to groom and feed Bramble, the fat pony…. He’d have spent all his time at the stable if her could.” When George is called up, Tilly makes Harry promise he’ll look after him.

Tilly’s Promise, is delight, showing the experience of war through a strong independent minded girl, and highlighting the atrocities of war on individuals; the venerable both human and animals, in a way that gentle enough for its audience whilst retaining the emotion and highlighting the questions of humanity and morals.

Tilly’s Promise it a captivating read for both teens and middle grade readers
Posted by Sally at 12:34 No comments: