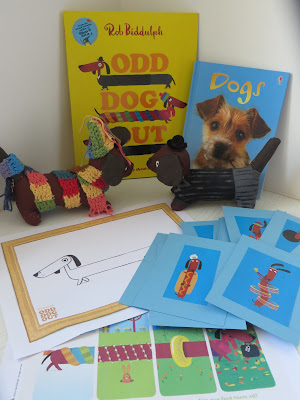 Here at Space on the Bookshelf we are rather fond of Story Sacks, as a playful learning devise, to help children foster their love of stories. Last year we did a series of features on how to create Story Sacks, along with pushing the concept to include non-fiction Story Sacks, plus ones for older reads, even up to YA.

It’s been a while since we did a Story Sack feature, so it is about time we remedied that with a Story Sack based on Rob Biddulph’s beautiful picture book Odd Dog Out. 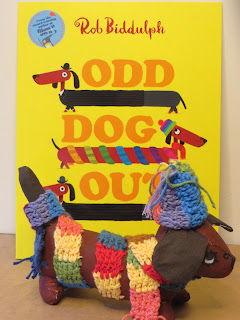 Odd Dog Out is a vibrant beautifully illustrated picture book, about a Dachshund, who is the Odd Dog Out in a city where all the other resident dachshunds look and behave the same; crowds of suited bowler hat wearing clones, who don’t approve or understand Odd Dog Out and his individual style. So Odd Dog out longing to be understood goes in search of other Odd Dogs Out like him. When he finds a place inhabited by dogs just like him, he meets an Odd Dog Out and realises that individuality is no bad thing, and becomes proud to stand out in the crowd. Odd Dog Out, is more than just an entertaining story and a veritable feast for the eyes, it also contains subtle yet positive messages about individuality and loving who you are. 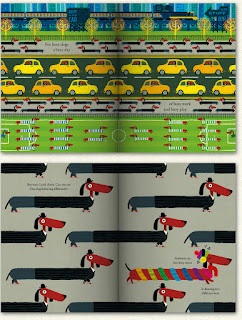 Odd Dog out is a perfect book to be the basis of a Story Sack, it is an engaging story, with a moral core, and has much potential variation on way that you could compile the story sack. But first let us begin with a recap of what a Story Sack is comprised of… 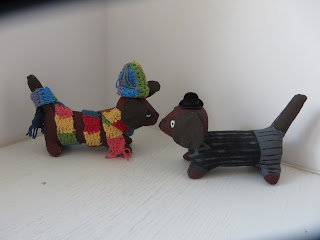 So, every Story Sack should contain soft toys. So for Odd Dog Out that is going to have to be sausage dogs. Now you can ether purchase one, like this TY one on the photograph, or if you a feeling creative, you can decorate your own, using blank dachshund soft toys (these ones found a well-known hobby retailer for £2.50 each.) To complete the look I got my Mum to crochet Odd Dog Out’s scarf and hat, and the bowler hat was also donated by Bookaholic and Crafter extraordinaire Leilah Skelton. Alternatively you could make a bowler hat with egg boxes and black paint. 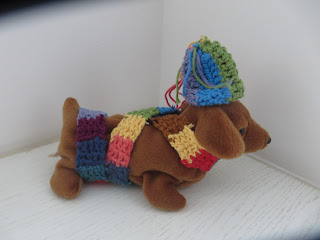 For the non-fiction book, I opted for an Usborne book about dogs, which is informative colourful and accessible for younger children. 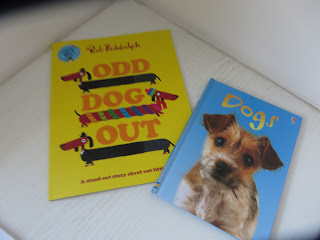 For the games, I have two options, The first one is Wiener Dog Playing Cards set which has different Dachshunds on every card, which can be purchased on line, and used to play happy families, or like story cubes. The second option is cheaper and involves a spot of crafting. In Addition to the book Rob Biddulph’s Odd Dog Out Characters feature on a line of stationary, cards and gift wrap. The gift wrap you can use it to make your own Odd Dog Out pairs game! 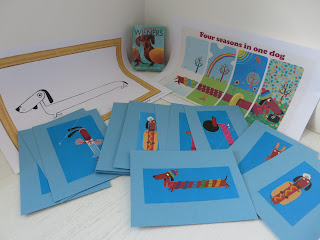 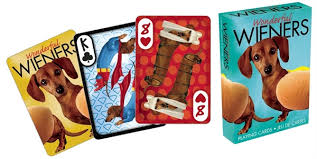 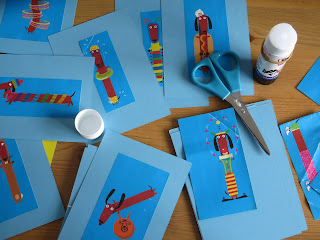 So there we have it one colourful and fun, Odd Dog Out Story Sack!


But before I go, I would like to quickly celebrate that fact that this tory sack was a collaborative effort, and would not have shaped up so well without the kindness of others both, and so please join me in thanking them.


A BIG Space on the Bookshelf Thanks goes to the lovely Leilah Skelton, who saw my twitter post and sent me the bowler hat for Not-So-odd-Dog-Out! Leilah is a senior bookseller from Waterstones in Doncaster. She does a lot of crafting with book promotion, and is a big fan of Rob Biddulph's work. So much of a fan that she has reviewed each of his books in rhyme! Leilah can be found on twitter at @Leilah_Makes 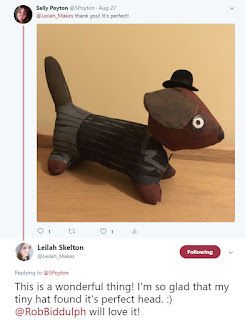 Also Thanks to my every obliging mother, Brenda Berry, who is often crocheting items for story sack, for the lovey Hat and scarf for Odd Dog Out.


And finally to Rob Biddulph for the fabulous books, and the worksheets!
Posted by Sally at 12:20