Baby Sophie is rescued from a sinking ship and brought up by scholarly Charles in London – an unconventional upbringing based on what he feels is important, involving lots of books and music and very irregular meals.

Sophie and Charles are used to staying one step ahead of the authorities, as Charles’ eccentric upbringing threatens to end in Sophie being taken to an orphanage. So the pair, following a slight clue, head to Paris to try to find out if Sophie’s real mother really did drown when the ship sank or if they can be reunited.

It would be a hopeless quest, but Sophie gets help from a bunch of children she meets who scrape a living on the Paris rooftops and starts a totally different adventure, leaping between buildings, catching birds to eat and only coming out after dark. She has to learn to tightrope and scale ancient buildings to keep up with them as together they search, before the police catch up with them.

It’s a magical tale, of children getting together to help each other and has a feel of a fairytale about it. But also Katherine’s imaginative use of metaphors lifts the writing of this simple story into giving you something unexpected on every page. And the descriptions of all the roof running are so well done it’s not good for anyone who doesn’t have a head for heights.

Although set in a different place and a different time there are similarities with Katherine’s first book ‘The Girl Savage’. That was based largely on her own wild childhood growing up in Africa. In the story Wilhelmina (Will) is sent from Africa to an English boarding school, where she discovers that all the skills and knowledge that served her so well are useless in her new environment.

They are both great stories about being yourself, not fitting in, as well as out-and-out adventure stories, full of eccentric twists, fantastically imaginative word play and a theme of believing the impossible.

Rooftoppers Review by Ollie
age 12
May 2013
‘Rooftoppers’ is an amazing book by Katherine Rundell. The book is about a girl named Sophie and she is the only known survivor of the ship called ‘Queen Mary’, everyone says she was orphaned in the wreck, but Sophie says that she definitely remembers seeing her Mum float away from the wreck. Sophie and Charles (her guardian) are both on the run from the police because the social services want to take Sophie away from Charles. So they travel to France in search of her mother and she meets a boy called Matteo on the rooftops and together they go in search of her mother.  Matteo teaches her how to run, jump and climb over the rooftops of Paris. Matteo is my overall favorite character in the book because it’s like he has no fear of dying, he can just swing over a tightrope like it’s two metres off the ground.
‘Rooftoppers’ is so good I went over my bed time by three hours just so I could finish it! The book was a gripping read it’s got lots of different genres like action and adventure; it also appeals to most ages (10+) and it is very enjoyable a satisfying read. Therefore I would definitely recommend it to a friend 10/10!!
A big thank you to OLA school Abingdon for having a review competition of which Oliver is the winner! 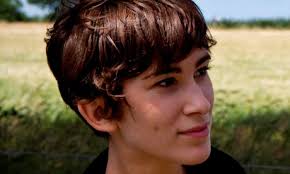 The books I read as a child got under my skin with far more tenacity than most of the books I read after 17 or 18. They set the world alight for me and bent it open; it seemed something very much worth giving a go.

I loved What Katy Did and Diana Wynne Jones' Charmed Life with an unweildy, obsessive passion. I think I can still quote chunks of both.

What was your favourite children’s book as an adult?

I read the Northern Lights trilogy in my teens, and have never stopped loving them since. I didn't read The Wind in the Willows until recently, and found it heaven. And Eva Ibbotson's Journey to the River Sea is beautiful.

What makes children’s books so inspirational?

What made you want to write this book?

I wanted to write about people who live wild, daring, unusual lives. I wanted to write a story with a girl hero, who was tough and stubborn and unwilling to give up: there are some great female characters in kids' literature, but still not nearly enough of them take centre stage. And I thought I'd like tightropes to feature, because they are such vertiginous and evocative things, and I hoped they might make the story feel a little dizzying.

Thank you Katherine. It's an amazing book and we hope there will be a sequel!
Posted by Nicki Thornton at 10:46