This Saturday (28th January) sees the Luna and Chinese New year, and the move from the year of the Monkey to the year of the Rooster. So we thought we’d celebrate this by sharing our favourite ‘Kids Lit Chicks!’ So here they are; some choices may controversial; the lack of Rosie from Rosie’s walk or the hens from Dick King Smith's ‘The Fox Busters’ may ruffle some feathers, but we love the capers of these feathery fowl and think you will too… 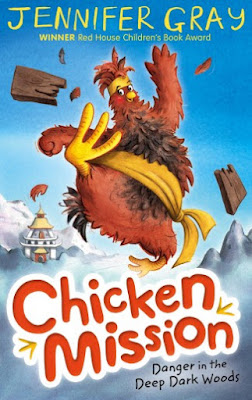 My best rooster in fiction award goes hands down to Professor Rooster in Chicken Mission: Danger in the Deep Dark Woods, by Jennifer Gray, part of the Chicken Mission Series. This story about ninja-training for chickens is action-packed, funny and a bit bonkers, plus is great for adults reading with their children as they will appreciate all the wonderful puns. Hooray for Kung-Fu Poultry (KFP). 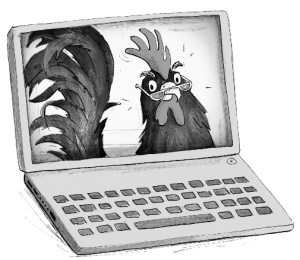 Another of my favourite fowl is Artemis Fowl by Eoin Colfer, I love this series for many reasons, but perhaps mostly because I can’t think of many series which focus on the villain – in this case a twelve-year-old child prodigy millionaire who not only believes in fairies, but that they truly have gold and he plans to steal it. 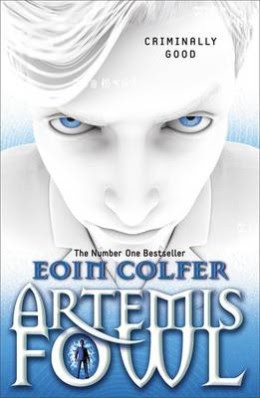 Fowl kidnaps Holly Short, but she is a special agent and more than a match for the boy, aided by his Butler, who thinks he has thought of everything. This is a great fantasy series, high on gadgetry and smart dialogue and characters that develop over the series showing that being an evil genius is not an easy road to riches. And it’s very funny too.

Both books are great reads for kids up to teen.


To quote one of the most misunderstood poets of all time William McGonagall, ‘The chicken is a noble beast,’ and I concur completely so narrowing down my favourite Kid’s Lit Chicks was not easy, (although Mr McGonagall kind of took away the compliment by comparing it to a cow which; stands in the pouring rain with a leg in every corner.) however I did manage to narrow the list down to two... 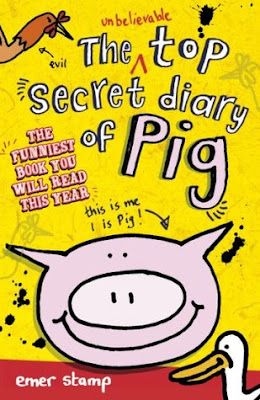 My first choice goes to the fabulously mean Super Evil Chicken from, Emer Stamp’s ‘The Unbelievable Top Secret Diary of Pig.’ Super Evil Chicken is the nemesis of both the Pig diarist and his best friend Duck, but this chicken and his brood of other evil chicken comrades, are more than merely mean; pooing on cow and eating Pig’s slop! No The Evil Chicken’s hatch a plan; fashioning a rocket out of an old tractor, and convince Pig to fly the ‘Trocket’ to Pluto. Super Evil Chicken is the most evil and wicked of all of Pig’s feather foes, and pig soon discovers to his peril, that sometimes first impressions are the correct ones. 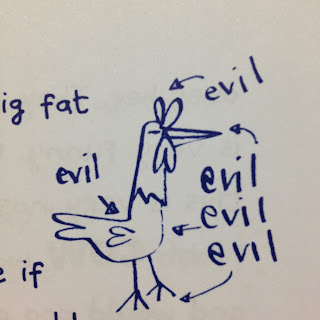 ‘The Unbelievable Top Secret Diary of Pig’ is perfect for early readers, but funny enough to appeal to children young and old.


But my all-time favourite Chicken is, Kureno Sohma from Natsuki Takaya’s, Shojo Manga; Fruits Basket. The story follows homeless orphan Tohru as she befriends the mysterious wealthy and beautiful Sohma family, discovering their secret curse. Collectively called ‘The Zodiac’, the Sohma’s curse causes some of its members to change from humans into the animals from the Chinese’s zodiac (and a cat with a grudge), when they are poorly or are embraced by someone of the opposite sex. As Tohru’s life becomes more entwined with the Shoma’s, she realises that there is more to the curse than metamorphosis; uncovering a dark cruelty, and starting her on a quest to free the family from their curse. 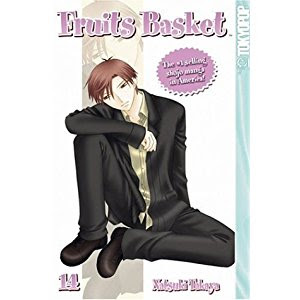 Kureno is the Sohma family Rooster, he’s aloof, endearingly clumsy, self-scarifying and loyal to a fault. Despite being the cursed member of the Sohma zodiac that the reader sees the least of in the books, he is beautifully empathetic and exquisitely flawed, making it impossible not to love him. But Kureno has a secret and when it is revealed, it soon becomes apparent that it may mark the beginning of the end for the Sohma curse.

Fruits Basket is a great read for young adults 13+.

Thank you for stopping by, we'd love you too hear what your favourite Kids Lit Chicks are, so please comment and let us know!
Posted by Sally at 07:39 No comments:

I wanted to add my voice to the already shower of good reviews for ‘Wed Wabbit’ by Lissa Evans, which gloriously imagines what might happen if you tumbled down a hole and landed in a favourite story, worse, the favourite story of your annoying four-year-old sister?

Ten-year-old Fidge does not want to read again the idiotic jollity of ‘The Land of Wimbley Woos’ to her sister, Minnie. But Minnie has an accident and somehow Fidge finds herself sucked into Wimbley Land. 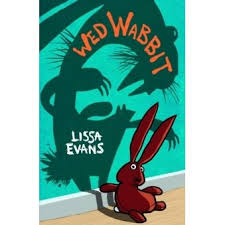 Fidge has to rely on that endless reading of the story and knowledge of its annoying characters to find out why she is trapped and how to solve the puzzle to get home again.

And if there is one person she would not want trapped with it is her delicate, worrier of a cousin, Graham, who freaks out if his mid-morning organic ice cream is not delivered exactly as requested.

There is so much to enjoy in the premise of what toys might be like if they came to life, such as having to listen to comfort toy (now life coach) Eleanor Elephant, advise on stress control and not rushing into things  –  when you've a hoard of evil, greedy blue dustbins on your tail.

Lissa Evans steers making the nightmarish world of Wed Wabbit, created in the mind of a four-year, old terrific fun, with lashing of jeopardy, while also subtly bringing in complex contemporary themes. It follows in the strong tradition of the very best children's stories – using fantasy and humour to explore challenging ideas, so plenty for adults to enjoy and definitely one for sharing (or keeping to yourself).

Loved the ‘punishment’ room where you are made to eat broccoli soup and crusts.

But then who could fail to love a story about a giant, malevolent rabbit?

My only quibble is why does Lissa Evans not write more? I adored the Costa-nominated ‘Small change for Stuart’ and her adult novel ‘Crooked Heart’. I look forward very much to whatever she might do next.

So make 2017 the year of Wed Wabbit. Otherwise that toy in the corner of the room, the one with the evil expression, might just be out to get you.