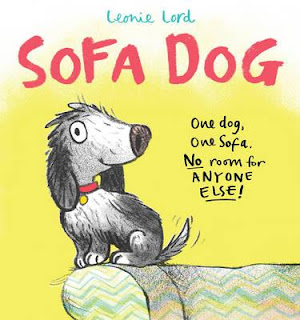 It is high time for a picture book to feature on SOTB Best of 2017 list, so here is the fabulously funny and charmingly illustrated Sofa Dog by Leonie Lord.

If you have a dog in the household or have ever had a family dog, then I’m sure this book will hit a cord, if you’ve not had the experience of sharing a house with a canine, then this is still; a humorous and entertaining tale, and maybe even serve as a warning to the nature of owning hounds!

Sofa Dog is a story about one sofa, one dog and the dog's human. Sofa Dog loves the sofa, and is only happy to share it only with it’s human, however begrudgingly Sofa Dog has to make way for not one but two cats, and just as Sofa Dog think it couldn’t get any worse there a rat-a-tat-tat at the door. 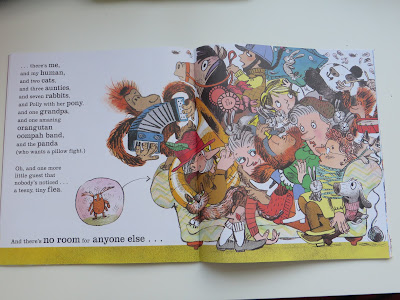 Before long the house is full and the sofa crammed with relatives, animals, and even a musical orangutan. The sofa gets so crowded that Sofa Dog gets pushed off and out into the rain. But soon something begins to move, and bite, and all the residents of the sofa being to itch. The itch leads to eviction, and Sofa Dog, has the Sofa back.

Being a owner of not one but two Sofa Dogs, I know that the observation Leonie Lord makes in the exquisitely envisioned picture book are all too true, and therefore believe that Sofa Dog is indeed one of the best of 2017! 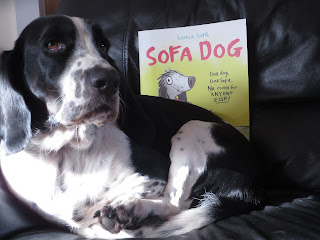 There are several things that might surprise you about the great warrior adventurer; the amazing Podkin One-Ear, that son of a chieftain and famously great hero.
Firstly, Podkin isn’t impressive at all at the beginning of his great adventure. He’s too lazy to even want to be a hero. In fact, he is spoilt rotten. But then everything changes when the big bad Gorm, the dreaded enemy, arrives.
Kieran Larwood’s tale of a rabbit thrust into an unwanted adventure won this year’s Blue Peter prize. It features the wonderful, Podkin, who lives in a cosy and well-ordered world, entirely happy to leave it to his sister, Paz, to pay attention in sword-fighting lessons – or any lessons at all. What is the point of them?
Podkin, his big sister, Paz and little brother, Pook, have to go on the run in a harsh and snowy world. Podkin has zero survival skills and must rely on the kindness of others if what is left of his family and his whole burrow are to stand any chance of not being wiped out. 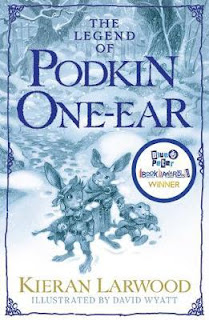 But in his heart, Podkin doesn’t want to be the sort of person no-one can rely on in a crisis. He needs to find out if any of his family have survived, save his burrow, and defeat the dreaded Gorm, who are ruthlessly taking over the previously peaceful world of the rabbits.
Podkin might be the only one who has any chance of finding a way to defeat the Gorm. But is it too late to pay attention not just to sword-fighting, but to his history lessons and find any way a small, scared and not very brave rabbit can stop the evil Gorm from dominating in a world where they have been banished underground.
The Gorm are a terrifying group of baddies, part-iron, part-rabbit, seemingly invincible. Why have the Gorm suddenly got so powerful? How on earth can they be defeated? Podkin is plunged into a position where there seems to something he has much to learn at every turn as he tries to gather an unlikely team to take on the enemy. But he's a character easy to like in this wonderful tale of a very unlikely adventurer.
Podkin discovers he has plenty of courage and learns to use guile rather than fighting skills, trying to outwit his opponents. He goes on an amazing journey, learning the history of the world he dearly loves and it so close to losing and finds friends and strengths he never knew he had.
A wonderful and imaginative adventure, sensitively told, packed with action and set in a well-realised world. This is definitely one of my Books of 2017.
Nicki Thornton

Posted by Nicki Thornton at 17:39 No comments:

Mold and the Poison Plot by Lorraine Gregory - Best of 2017

Mold, whose most distinguished feature is his very large nose, works for healer, Aggy. He must go on a journey and learn to be a hero when Aggy, who has looked after him since he was abandoned as a baby, is arrested for poisoning the king.
Aggy’s arrest leads straight into a page-turning adventure, the action plunging Mold through city sewers and into wild swamps, into a world fraught with unexpected dangers and some very nasty smells. 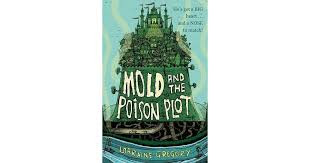 He ventures far from the world he knows, staying only one step ahead the bad people after him, finding help in unexpected places. Despite everything thrown at him, Mold never gives up, knowing only he can find a cure, stop the king dying, and prove Aggie’s innocence.
Mold is a character easy to warm to, big-hearted, as much as he is big-nosed. He makes increasingly good use of this most distinguishing feature, discovering he can tell someone’s character from their scent.
This intelligent adventure has many subtle themes running through it – pleas for tolerance and for celebrating difference rather than being afraid. Mold discovers much during his adventure, not least that the king he admires has not always behaved well to the people he rules. And about his own heritage and why he was abandoned.
Debut author Lorraine Gregory admirably brings in these big themes into a page-turning adventure. She also gets top marks for breaking a few rules (brave for a debut author), particularly her use of dialect. Mold’s voice is not only authentic and easy to understand, but it also pulls the young reader straight into Mold’s colourful world.
‘Mold and the Poison Plot’ is a perfectly-pitched and captivating fantasy adventure featuring the truly marvellous Mold and is a really very classy read indeed.
One of my Books of 2017 - Nicki Thornton
Posted by Nicki Thornton at 11:38 No comments:

Email ThisBlogThis!Share to TwitterShare to FacebookShare to Pinterest
Labels: book review, books of 2017, Lorraine Gregory, Mold and the Poison Plot

From an exciting opening that features a plane crash into the heart of the Amazon jungle, Freddie, Con, Lila and Max are plunged from the skies right into the heart of the rainforest and begin their story of survival in a world that is menacing, unfamiliar and fraught with danger.
All have had a sheltered upbringing where the closest they have come to adventure is reading about it in books. Now they need to work out what berries they might eat without dying, and come up with a plan of how on earth they might achieve the impossible, escape the miles of dense, threatening jungle and get home.
The team make an enchanting group. They quickly learn they must depend on each other and put their differences aside to survive. They all have to be brave and find skills they didn’t know they had as well as look after each other. 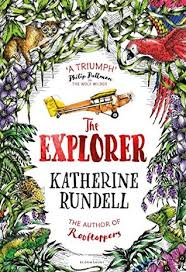 When help arrives it is in an unexpected form, along with the growing realisation that the only possible way out is to first learn to live successfully in the jungle rather than trying to fight it.
It’s an old-fashioned adventure story that will appeal to anyone who dreams of being thrown into an adventure where you only have your wits and bravery to survive.
From being an unfamiliar and threatening place, the children learn to work with the jungle as they learn to work with and trust each other, gradually building as much of a strong bond to each other as they do to the unfamiliar and dangerous world that surrounds them.
From an exciting tale of survival against the odds, grows a charming, compelling and warm-hearted tale of friendships forged in danger, responsibility – and respect for the natural world.
Not simply an exciting adventure story, this will leave readers with plenty to think about.
One of my Books of 2017 - Nicki Thornton
Posted by Nicki Thornton at 10:44 No comments: